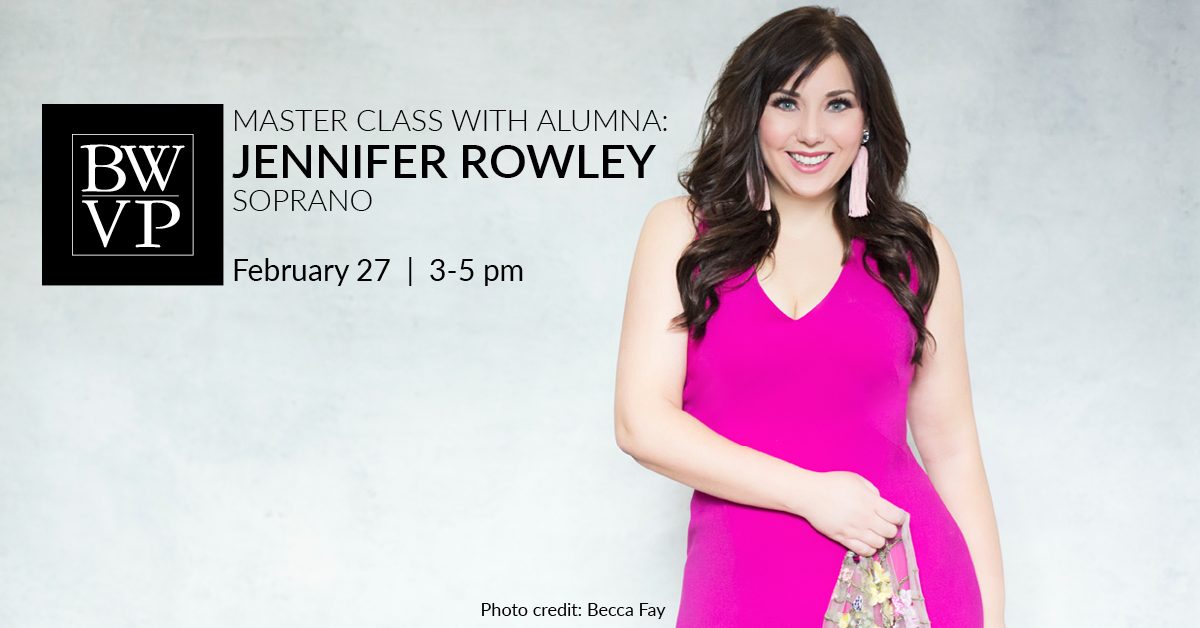 Join a BWVP master class on Saturday, February 27, 3-5 p.m. EST with alumna and soprano Jennifer Rowley, acclaimed worldwide for her unforgettable voice and remarkable stage presence, singing a richly varied repertoire that includes many of opera’s greatest heroines. Please register for the Zoom session below.

In the 2020/21 season, Ms. Rowley adds another Verdi role to her growing list of repertoire, marking her role and house debut as Amelia Grimaldi in a new production of Verdi’s ‘Simon Boccanegra’ by Andreas Homoki at Opernhaus Zürich. The opening night performance will be streamed live from Zürich, and this production will be captured for a future DVD release.  Ms. Rowley was engaged to sing her signature role of Tosca for two greatly anticipated house debuts, first at Opéra de Marseille and then at The Dallas Opera, and a return to Opéra national de Paris as the title role of Verdi’s Aida, in a new production by Dutch director Lotte de Beer.

In the 2019/20 season, Ms. Rowley made her house and role debuts at the National Theatre Prague as Amelia in Verdi’s Un ballo in maschera, and at the Gran Teatre del Liceu in Barcelona as the title role of Aida. Of her Aida, Platea Magazine praised her “phrasing, breath management, expressive force in the high notes and subtlety at important moments,” calling them “her best weapons.” In Prague, her portrayal of Amelia garnered critical acclaim from KlassikaPlus.Cz, saying she gave the role “a romantic expression with a great personal touch in both voice and acting, with vocal certainty,” and that Rowley is “undeniably a dramatic artist.”  On the concert stage, Jennifer returned to Fort Worth Opera for a concert with pianist Joe Illick, joined by New York City Opera baritone Raymond Diaz. She sang a recital with Opera Naples, part of their “Opera Stars Concert” series; she returned to the Salisbury Symphony as the featured artist in their “Opera Fireworks” Gala Concert, and she also performed in concert for Toledo Opera.  The following performances were unfortunately canceled due to the global pandemic: the title role of Tosca and Musetta in La Bohème at the Metropolitan Opera; her house and role debut at Opera Australia as Elizabeth I in Donizetti’s Roberto Devereux; Aida at Toledo Opera; and Beethoven’s Missa solemnis with the Philadelphia Orchestra in Philadelphia and at Carnegie Hall.

An avid mentor to young artists, Jennifer led her first Virtual Artist Residency with Fort Worth Opera, where she held weekly themed Zoom masterclasses, engaging lectures, and casual Instagram Live chats with other singers, directors, coaches, and opera industry professionals. The success of that series led her to create an exclusive, six-week Virtual Audition Intensive with FWO to help singers navigate the new normal in the world of online auditioning.

Additionally, Ms. Rowley returns to Baldwin Wallace University for her third Artist in Residency, where she will teach BW students in masterclasses and lessons and present a solo recital. Last season, she led masterclasses at SUNY Potsdam, Bowling Green State University, and the University of Miami, and she taught on the voice faculty at the International Summer Opera Festival of Morelia.