A Different Musical Language with the Africa West Trio 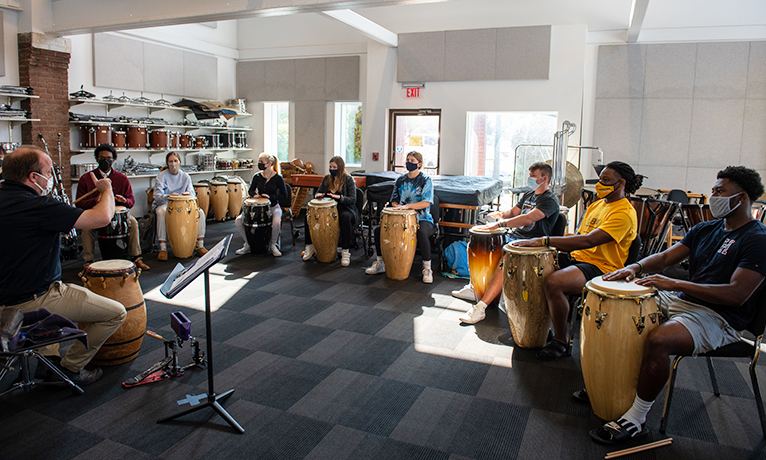 The diverse music that Africa West performs breaks traditional language barriers and connects beats of the heart. Josh Ryan, professor of Percussion and Chair of the Woodwinds, Brass and Percussion department at Baldwin Wallace, is a member of the Africa West Trio in residence at the Conservatory that performs and offer workshop in West African music.

The Africa West Trio consists of Josh Ryan, his brother Jamie, and friend Ryan Korb. The group met as college students at Lawrence University in Wisconsin, but were only in school together for one year. They wanted to put together a group where the focus was not on making a profit, but exploring a topic of shared interest and passion. The group was inspired by their teacher, who performed in a percussion group that performed cultural, fusion, percussion music, or West African-based fusion. With this interest inspiration, the official “Africa West Trio” was formed in 1999. The trio started by playing traditional music together and teaching each other what they knew musically. After lots of learning and practice, the trio began composing their music with some traditional materials while fusing Western music into their pieces.

The group has been to Cuba to study music, and Professor Ryan has visited Ghana, West Africa, several times. “Going to these places to study has been important for us to see how the music is used in its traditional circumstances,” Ryan said. 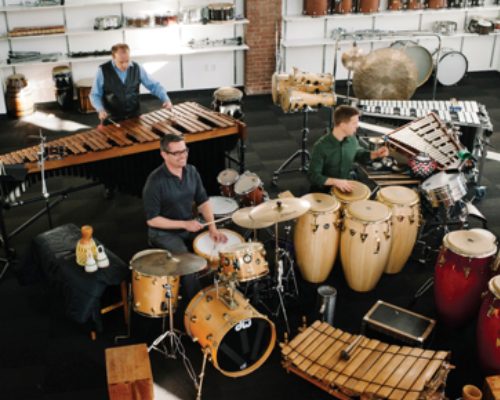 The trio has also had teachers at BW share their traditions and the traditions of their students. According to Ryan, these traditions include a “different music vocabulary than we were taught as music students in school, but it’s one we’ve been working with for 25 years now—it’s a different musical language, and it’s a fantastic one.”

Professor Ryan came to BW in 2000, and the Africa West Trio became an ensemble in residence at the University. The local university setting encouraged a community following for the group. Ryan said, “Representing BW externally has been one of our main missions over the last 20 years. But now we have the invitation and impetus and drive to focus more internally to get people engaged in music-making and examine another system of making music and demonstrate some entrepreneurship as well.”

Ryan’s favorite venue to perform in is “any public venue where people are eager to come and sit and listen to music. Anything where we get the chance to do a workshop with them later and share some of the music.” In one of their recent campus visits, they had a drumming day for the whole campus. While on campus, the trio also holds master classes and workshops for students and the public so that everyone can enjoy their music.

Ryan provided an example of the significance of West African music in the modern industry. In a percussion studio class, the students listened to current popular songs on the radio. “We took them apart and listened to some of the rhythmic structures and traced them back to West Africa with some of the West African rhythms and phrases that they know. We think of a lot of pop music and rock music as American music, and it is—but really, one of the parents or grandparents of that music is music from West Africa,” Ryan explained.

“I would say that studying a very dense and complicated music made me better at classical music. I always think of it as cross-training for an athlete. When you try a different kind of sport, it makes you better at your original sport. And most importantly, traveling to these places has gotten me out of my bubble and made me aware of other things culturally, musically, politically, and spiritually that are really good lessons to learn.”