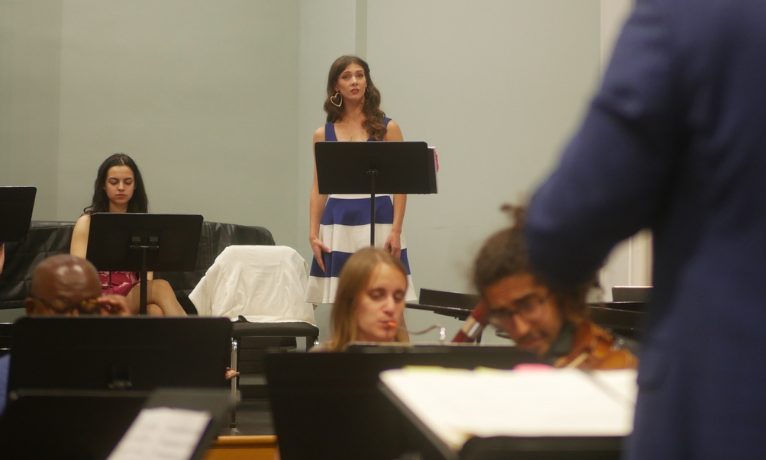 Dawna Rae Warren '18 in a rehearsal for the world premiere of La Casa de Bernarda Alba.

In this production, she has a rare opportunity to get a glimpse into her future, as she shares the role of Adela with BW aluma Dawna Rae Warren ‘18.

This will be her life in just a year, after she graduates from BW and moves on to her next adventure.

“Right off the bat, it’s been one of the biggest learning experiences that I've had in performance,” Sorrentino says. “I have learned a lot from [Dawna Rae], not even by talking to her and asking her about stuff, but just by watching her perform… Her stage presence is insane.”

One aspect of performance that Sorrentino has found challenging is the constant balance of singing, acting, moving about the stage, and paying close attention to the conductor–without it being obvious that she’s looking at the pit.

Warren, she says, is a master at this.

“Being able to work alongside someone who has more experience has been really, really cool, and it's definitely an experience I needed,” she says.

From Warren’s perspective, this has been an opera six years in the making. She began learning the role, which was crafted especially for her voice, when she was a junior in the Vocal Performance program at BW. Through the pandemic, through her graduate studies and beyond, Warren has carried Adela with her.

“She’s the youngest character, she’s 20 years old, which is probably how old I was when I started learning this role,” Warren says. “To think about how I viewed her when I was 20, versus how I view her now that I’m 26… she’s very precious to me.”

“As a student, I picked BW because it was undergrad only, so I would get performance experience. But then when Scott [Skiba] came, it changed the whole game because we got to perform with Cleveland Opera Theatre, and work with professionals instead of just people our age. And that was such a meaningful and pivotal moment in my training.”

Now she’s on the other side of that opportunity she had as an undergrad student, and Warren feels lucky to be giving back.

“I drove 20 hours by myself in my car with my dog from Colorado to come back and do this, because it’s that important,” she says.

The musical learning experience has certainly been an opportunity for growth, but it’s not the only thing that has caused a noticeable shift in Sorrentino’s portrayal of Adela.

Offstage, the all-female cast has had moments of conversation that bonds them, and that as Sorrentino explains, have caused her to view her role “completely differently.”

La Casa de Bernarda Alba, based on the Federico García Lorca play of the same name, is a show that carries with it dark, relevant themes. Co-commissioned by Baldwin Wallace University and Cleveland Opera Theater, the show is a tragic drama set in Spain and centered on the family and legacy of Bernarda Alba and her five daughters—Angustias, Magdalena, Amelia, Martirio, and Adela. The women are told by their oft-abusive mother to stay silent, to stay obedient, to stay chaste, and to stay home.

“Just from hearing the alumni talk about the show and discuss their characters, I learned a lot about Adela that I hadn’t even thought of before,” says Sorrentino. “That opened my eyes to more possibilities as to how I could portray Adela. All of the topics in this show are pretty serious, but we had a discussion about the themes and the topics and it was very eye opening. I think having all of us together as women, and our views on this opera and the topics that it does bring up, have made this opera even more powerful, and definitely very deep and emotional.”

“We can’t escape what this opera is about,” Warren adds.

“Looking in the media at what’s happening, like in the Johnny Depp and Amber Heard case, you just can’t escape it. It’s really special that we get to be working on something that’s so relevant right now. We’re really part of something special here.”

Sorrentino feels the same way. “I almost started crying because it’s so overwhelming. The entire show, it’s incredible. All of us brought together has made it that much more impactful.”

“I am just absolutely shaken by the story line, by every single detail of the show.”