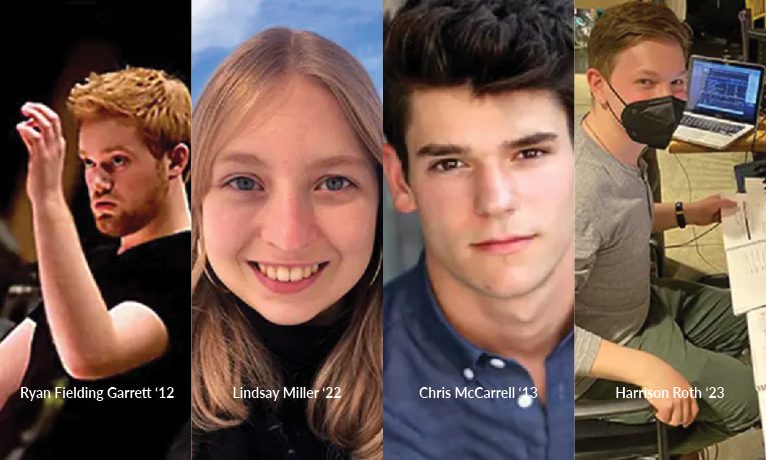 A new partnership. Ongoing affiliations with Broadway. And its first graduate. BW's Bachelor of Music in music theatre direction is marking its two-year anniversary with vivace and accelerando.

For non-Italians or those unfamiliar with music terminology, the translation is an on-point way of saying the highly selective program within the BW Conservatory of Music is quickly building momentum in helping prepare music directors to make their mark in the music theatre industry.

Among recent successes is the addition of Broadway "Kinky Boots" music director and conductor Ryan Fielding Garrett '12 to the adjunct faculty as a remote instructor offering weekly private lessons and bi-weekly studio classes for students.

Also exciting is a new partnership with Cleveland's Near West Theatre that puts BW students at the helm of directing music for shows being held at the theatre troupe's 275-seat venue in Cleveland's Gordon Square Arts District.

For music theatre direction majors Lindsay Miller '22 and Harrison Roth '23, the new major allows them to stretch their musical, creative and leadership skills.

"I came to BW as a piano performance major and then discovered music direction," explained Miller. "It is an honor to be the first graduate of our new, official music direction program.

"There have been other student music directors before me that have gone on to create amazing work on Broadway and national touring productions. I hope to make them proud by following in their footsteps and being a positive role model for those who follow the same path," the Greendale, Wisconsin, student noted.

Miller's capstone project will be to serve as music director for "The Lightning Thief: The Percy Jackson Musical," a BW collaboration with Playhouse Square that will be performed April 22-24 at the acclaimed Cleveland theatre.

This opportunity will build on Miller's repertoire of experiences that include working as a music director, associate music director, rehearsal pianist, pit musician, accompanist and music assistant in Milwaukee, Cleveland and Cape Cod, Massachusetts.

Alongside her for the production will be "Les Misérables" Broadway star Chris McCarrell '13 in his directing debut. The BW music theatre grad originated the role of Percy Jackson in the 2017 Off-Broadway production, took it on national tour and ultimately reprised the role on Broadway in 2019.

Adding to the YJ4L prestige, "The Lightning Thief" will be a trifecta of BW student collaboration — music theatre, arts management and entrepreneurship, and music theatre direction ­— that covers all areas of the production. This year also marks the 15th anniversary of spring partnership productions between Playhouse Square and Baldwin Wallace.

Roth, a 20-year-old from Toronto (Ontario) Canada, will be the inaugural BW music director for the Near West Theatre partnership. His production of Rodgers and Hammerstein's "Cinderella" will run March 25-April 10.

Creative in his approach, Roth interned last summer as a music director for the Clinton Area Showboat in Iowa. For the final show of the season, he composed an original score for its production of "Constellations" that incorporated live and digital production techniques to create and program the score. His work garnered high praise in a local newspaper.

"At BW, I have studied privately with resident music directors and gained valuable insights. In an apprenticeship with the director of choral studies and chair of the conducting department, Dr. Dirk Garner, I had the opportunity to lead rehearsals and conduct the BW Motet choir. These experiences have been invaluable as I have carved out my trajectory at Baldwin Wallace," he emphasized.

"Ever since I saw my first musical as a kid, I knew that music theatre was the thing I was meant to do. I have explored and trained in multiple different aspects of music theatre — from performing to writing to lighting and scenic design and now to music direction. My goal post-graduation is to music direct in New York, and I have been slowly unraveling that path over the last few years at BW," he said with affirmation.