Check out  the interview of Dr. Gene Willet and his students on Spectrum News 1.

Mario matters. He has for nearly 40 years. Now he's part of a class at BW. And students are loving it.

The full-mustached icon first came into the limelight in the early 1980s in a popular video game that featured him and his brother Luigi exterminating creatures from sewers. With its beeps, bloops and lively simple tune, the beloved game of the past has evolved into today's top-selling Mario Kart series, where a sophisticated soundtrack provides an immersive experience for a thrilling race extravaganza.

Who'd expect to ever find the pop culture icon in a classroom at Kamm Hall? But he's there, along with 14 students enrolled in Dr. Gene Willet's Music and Meaning in Video Games class.

Last year, the gaming industry brought in $165 billion, more than the global movie and North American sports industries combined. With 2.7 billion gamers worldwide, the mega impact of this booming business makes it an entertainment titan and career interest of students.

"One of the most important — and often overlooked — aspects of video gaming is the music," emphasized Willet. "From its early days of rudimentary sound to its current scores that have been performed as major symphonic works, video game music has gone through a technological, stylistic and functional metamorphosis.

"Music and sound provide important information and context for players. For example, they can let a person know an enemy is coming up from behind or waiting around a dark corner. The specific type of sound or music can even cue a player into knowing what kind of enemy or how threatening it is," added Willet. 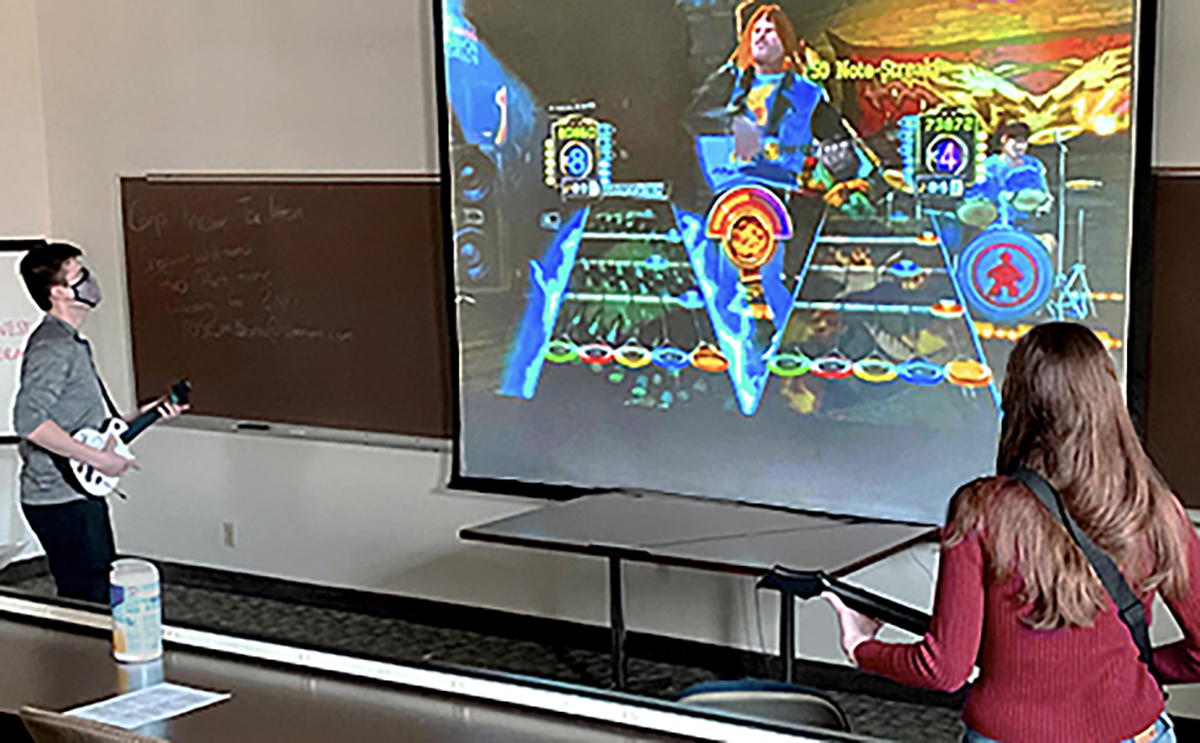 Sellout course in one hour

In its inaugural semester, Willet's course filled in one hour on the first day of registration. It was only open to Conservatory of Music students, but Willet is working to make the course a permanent offering at BW that will be available to all students.

A film music scholar, Willet believes music and sound in video games are very similar to film. But video games give participants the added opportunity to interact with the music and even control it through actions and movement during play. This, he said, allows the audio to be different with every playthrough and helps players establish strong, long-lasting bonds with the music.

No doubt, Willet's students have formed their own positive connections to his class. He built into the syllabus a few "play days" where they study gaming firsthand — which is a wink and a nod to having a gamepad in hand. But the amiable professor is quick to affirm the class is not easy nor light in content. Woven into the semester-long course are extensive readings and multiple guest visits by some of the top researchers in the field.

"Some individuals might think music theory and history are only of interest to Conservatory students. But music is integral to our lives. I took a contemporary topic and challenged our students to think about and learn how the creative, strategic and technical elements of video game music come together to engage a player in a meaningful, interactive virtual experience," stated Willet.

"Many people fondly remember arcade classics like 'Donkey Kong' and 'Super Mario Bros.' or enjoy today's popular games like 'Plants vs. Zombies' or 'Super Smash Bros.' But the takeaway from this class isn't the games themselves, but rather the dominant and valued role music has for us individually, collectively and across billion-dollar industries," he concluded.