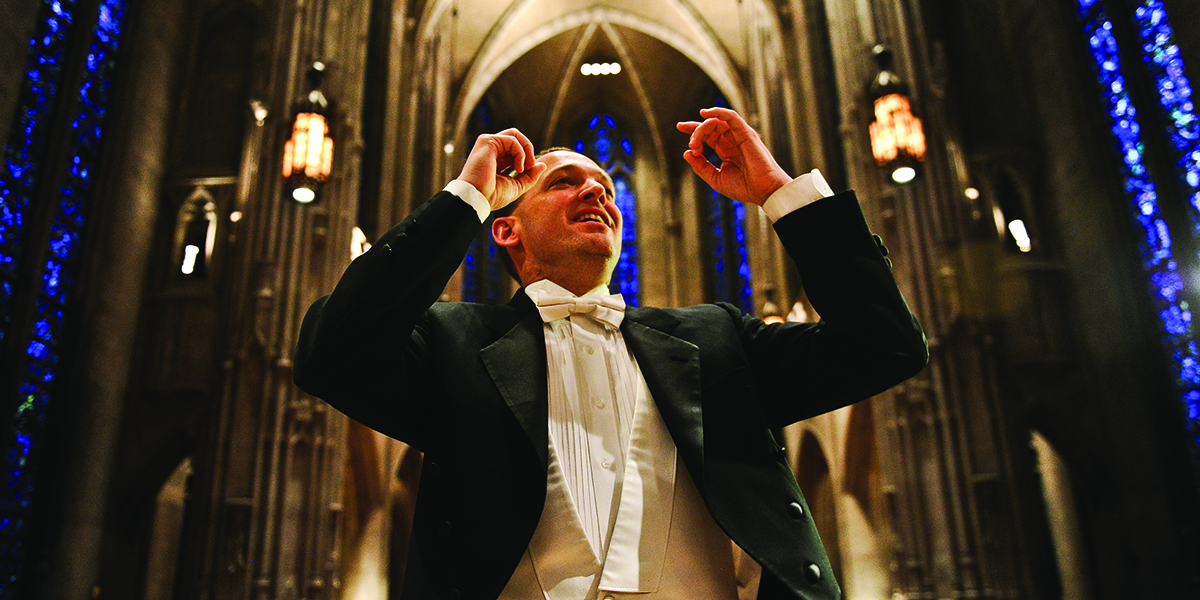 What do you look forward to most each year as the artistic director of the nation’s oldest collegiate Bach Festival?
There isn’t much I don’t look forward to. I came to BW for the Bach Festival. I’ve been a Bach scholar my whole life and that’s what drew me here. The opportunity to study his music year after year, especially in a repertoire that takes a lifetime to learn, is really quite moving. But even so, the reason why I do what I do is for the people, not the music. I’m here for the experience that comes along with it. I look forward to taking the journey with my students, watching their growth each year, and collaborating with a whole host of professionals from around the world. There is so much to get excited for each year.

This is the second year in a row that we had to cancel the in-person festival. Is there anything that you would like to say to our long-time attendees?
We really hope that our life-long Bach festival supporters will attend Mass in B Minor on April 17th, more information is available at conversation.bw.edu/bach. The event showcases the Bach Festival throughout the years, starting with recordings from 1954. It explores the movements over the decades and ends with our most recent performance in 2015. Even though we can’t make music together, it gives us a chance to bring the community closer, which is what the festival is all about. It is a way for us to connect through the music of Johann Sebastian Bach.

You are curating all the previous recordings and historical and recent photographs of Baldwin Wallace’s Bach Festival beginning from 1954. What has your experience been like and what do you hope the audience will take away?
It will be hard to miss. It’s my favorite part of the festival this year. Our first recording dates from 1954, and our next one jumps to the 1971 festival. Our recordings from the 50s are really special. Unlike today, technology was much more complicated and recording music was a difficult task. Although the software wasn’t as simple, both the quality of the recordings and the music is exceptional.

The consistency of music making over the years has always been at a high standard. This will be exhibited in Mass in B Minor where our photography collection of past and current Bach Festivals will be revealed.

Bach’s music is some of the most challenging music in the world, especially for singers. So to perform with undergraduate students at such a superior level year after year just amazed me. The Conservatory wasn’t the same back then as it is now. We are larger and more selective, yet the quality is consistent all the way through. I look forward to sharing this content with everyone on April 17th.

In the weeks leading up to our 2021 Bach Festival, your podcast series “Bachcasts,” which provides a retrospective on the event, will be released. Can you tell us your intention with the series?
My intention is to keep the BW community connected through the pandemic. Although we are unable to prepare an in-person festival, we were able to reflect on our past, think about our future, and then find a way to connect those two. I’ve interviewed past directors as well as recent and earlier alumni. Watching and listening to those, I hope, will enable our community to feel and remain connected to the festival.

For the first podcast, which was released on March 16th, I interviewed Dwight Oltman who was the music director for 39 years. When I first started working at BW, I prepared the Bach Festival choirs for him. He had an incredible career and influenced so many lives. It was incredible to recount all of the thousands of people who have watched him work, and the thousands of people who have worked with him.

We also got to interview Stuart Raleigh, my predecessor and the former director of choral studies at BW. We also talked to alumnae from 1959 who shared an amazing story. They were directed by Oltman’s predecessor, George Poinar. My conversation with the recent graduates was similar to that of the 1959 alumni. It was remarkable as they are no different from each other. We also interviewed BW faculty who have played in our festival for a long time.

I got this amazing retrospective of the Bach Festival through the years. I know and care about the history and traditions deeply, but to give everyone an opportunity to tell stories and share their memories was amazing. My podcast series gives a beautiful view of what our festival has meant to so many people. It was such a treat to be a part of.

What was your favorite aspect of connecting with the special guests?
I wasn’t expecting our meetings to be so wonderful. I was looking forward to speaking with everyone, but I had no idea that the podcasts would turn out to be so great. I knew that everyone had something important to share, but I didn’t expect the content to be as rich as it was. It reaffirmed how important this event is to so many people for nearly 90 years now. To be leading the Bach Festival is humbling.

Was there anything interesting or unexpected that popped up during the podcasts? Did you learn anything new?
There was something new I learned from everyone I interviewed. I enjoyed reconnecting with the recent graduates, who were my former students, and speaking with my predecessors. I love the history of this festival and I have been able to experience it directly through these interviews. Hearing about past traditions from the 1959 alumni was incredible and so many of those traditions are still alive today. The brass playing from the Marting tower, the social events that surround the festival, and the community that’s created through music - all of that is the same as it was eighty years ago.

There is no other school in the United States that hosts a Bach Festival with undergraduate students. The music of Johann Sebastian Bach is incredibly difficult to master, it is in so many ways way beyond what 19 year olds are supposed to be capable of. As the artistic director of Baldwin Wallace’s Bach festival, I am humbled to work with such talented students.