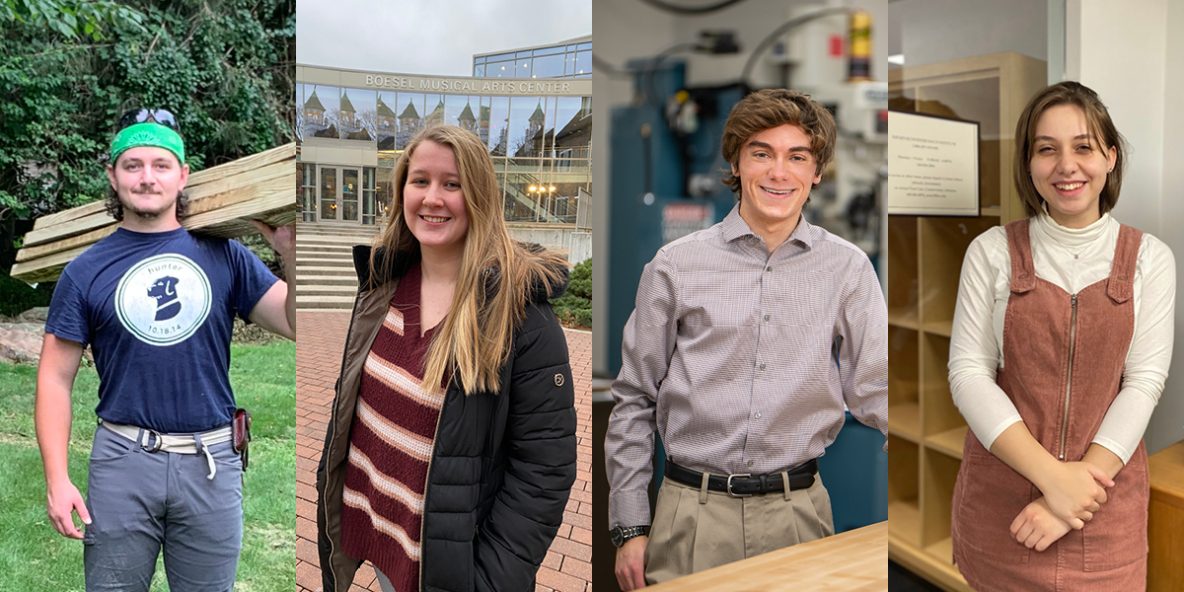 Harrison Gilberti '23 believes in perfect harmony — the music kind as well as the type that enables him to see every detail of his paradisiacal career vision. And while his goal is a lofty one, the passion he brings to it is inspiring, dedicated and focused. After all, only a true visionary could meld opera with aquaponics.

Gilberti is one of 10 students who are bridging a major in BW's Conservatory of Music with a STEM major. For these students, the dual programs enable them to lean into their analytical, creative and technical acuity. And while STEAM (Science, Technology, Engineering, Art, Math) may not be a familiar term to some people, advocates of the concept believe the addition of the arts infuses STEM with newfound creativity and innovation.

From Aria to aquaponics

"While my majors do not coexist together well, my love for them makes everything worth it," emphasized Gilberti, who is studying environmental science and music performance. "I plan to go to grad school to receive a master's degree in either vocal performance or opera. Afterwards, my goal is to perform for as long as possible and, during off seasons, build and renovate aquaponics farms."

Aquaponics is a form of agriculture in a water setting that utilizes the relationships between plants and aquatic animals like fish, crayfish or prawns. Waste from the fish provides nutrients for the plants. The plants, in turn, help purify the water for the fish. An important component is nitrifying bacteria that convert the ammonia in fish waste to nitrates usable by plants.

"My future dream is to buy a patch of land, build an aquaponics farm and a theater, and create a haven for the science and the arts — where people can come to learn about aquaponics, renewable energy and the arts. We could put on summer stock productions and have educational camps for kids," he mused.

"In summer 2020, I began building my own aquaponics farm in my back yard in Trumbull, Connecticut. I continued the project this year. Next summer, I want to finish building it and to plant veggies," Gilberti continued.

"At BW, I am going to be in two operas in the spring semester, which I am extremely excited about doing. The ability to combine two very different majors that have such different activities associated with them is truly rewarding. I am so grateful to BW for supporting my goal," he said.

Pivoting to find her pathway

Olivia Caraccio '22 knows about academic pivots. She made a few along the way. But the meandering process yielded a fortuitous career destination for the Rochester, New York, native.

Caraccio came to BW as an undecided major with an interest in medical school. She settled on majoring in science but kept her options open. After becoming acquainted with the Conservatory's music therapy program, she pursued that program because it combined her interests in music, neuroscience and helping people. But the fit wasn't right, so she switched out of the Conservatory and settled on neuroscience and biology. But something was missing.

"My favorite Conservatory classes were the tonal harmony and solfege sequences. I found music theory to be incredibly interesting. I loved learning about what makes music work and what musical techniques are used in a composition to get the desired effect and reaction from the listener," she added.

"I came across music cognition, which is a fairly new field that studies how music is perceived by the brain. After reading more about it, I decided it was something I wanted to pursue. Music theory and neuroscience provide the right undergraduate studies for this field. It was through my experiences at BW that I found the right career path that I probably wouldn't have found otherwise," summarized Caraccio.

Ask Martin Mann '24 and Hannah Ross '24 about their career plans, and they'll point to acoustics. But the two Conservatory of Music performance majors are following slightly different directions.

Mann is studying French horn and engineering. He envisions his future self as helping to design new concert halls and renovating old ones, as well as performing in an orchestra that tours across the world.

"I came to BW for many reasons," said the Milford, Michigan, resident. "The university has both a great Conservatory and engineering program. Hands-on learning is emphasized. Here, I cannot only double major but create my own path to achieving my desired career goal."

Ross, who bridges physics with cello performance, also credits BW for helping her find her passion.

"I've loved playing the cello since I was a young kid. But I didn't consider making it part of my career until very soon before I had to audition for college. For physics, I hadn't ever taken a class in it, but it seemed really cool. Now, a couple of years later, after studying physics and music, I'm confident I made the right choices," she said enthusiastically.

"I'm this year's Gott Scholar in the Riemenschneider Bach Institute Scholars program. The project I am working on is studying the acoustics of the cello and the viola da gamba. I am analyzing the resonances of these instruments when bowed and when tapped to try to find out what makes a cello sound like a cello and a viol sound like a viol. This is my first real experience with musical acoustics, and I have learned so much along the way," noted Ross. She will present her research at BW's 90th Annual Bach Festival in April.

"I feel so fortunate to have found passions in both music and physics. I can't wait to see what career paths these interests may take me down," she said.