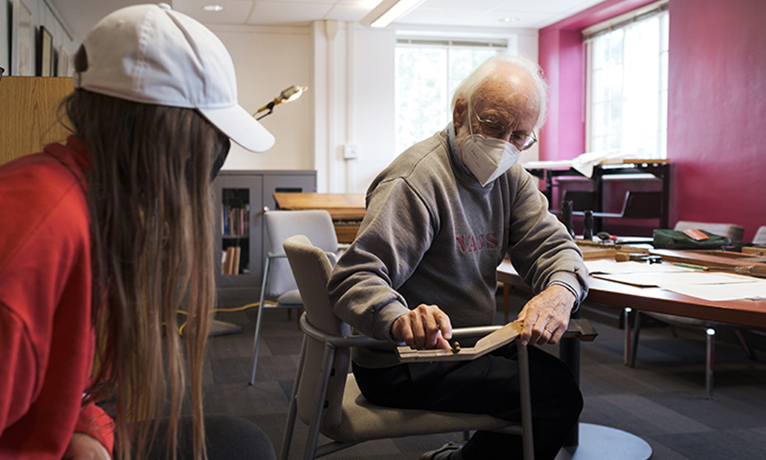 Laurence Libin discusses a square fortepiano made by Verschneider and Sons in 1792 with a Conservatory student. Photo credit: Kevin Ng

Students, faculty, and staff had a rare opportunity this fall to meet a celebrated organologist (someone who studies the history of musical instruments). Laurence Libin, editor-in-chief of the Grove Dictionary of Musical Instruments, honorary curator of Steinway & Sons, emeritus curator of musical instruments at The Metropolitan Museum of Art, and recipient of awards in organology from the Galpin Society and the American Musical Instrument Society, came to the Riemenschneider Bach Institute (RBI) as a Martha Goldsworthy Arnold Fellow.

Libin was drawn to a mysterious instrument in the RBI: a square fortepiano made by Verschneider and Sons in 1792. The very fact that a fortepiano was made by a family better known for organs was intriguing enough. But as the days went on and Libin carefully dismantled the instrument, numerous mysteries were answered, while others were created. He found a mark by M. Asseman, an instrument restorer who worked in Paris in the twentieth century. Two French franc coins found in the instrument probably date this repair to the 1950s.

But why was the instrument so poorly constructed? Numerous aspects show the mark of an inexperienced or careless woodworker. And, while some elements of the instrument are clearly from the eighteenth century—the thick veneer, for example—others show the marks of modern machines, screws, and the like. Most intriguingly, how and when did the instrument come to the RBI? We have a letter from 1985 to the director of the RBI at the time, Dr. Elinore Barber, quoting a price for restoring the instrument, but apparently this was never done. How the instrument made its way from France in the 1950s to Berea, Ohio by the 1980s is still a mystery.

Libin met with several students, faculty, and staff during his short visit. These presentations highlighted Libin’s special gift (honed by many years at the Metropolitan Museum) of explaining the intricacies of organology to a broad audience. Assistant Professor of Choral Music Education Jami Lercher agreed: “It was like CSI-Music Edition as we learned of all the various clues that help explain the story behind a musical instrument. He shared insights through a conversation that unfolded to bring even the most amateur musician to a deeper understanding of his craft.” Several students gained insight into potential career paths. Elizabeth Jorgenson ’23 said, “As someone who is interested in studying musical instruments, it was very inspiring to watch Libin work.” Sarah Carter ’23 agreed: “It was so fascinating to see how Libin could extract the story of an instrument through seemingly minute details. As a hopeful future archivist, seeing how the provenance of an instrument can be revealed by the instrument itself was honestly awe-inspiring.”