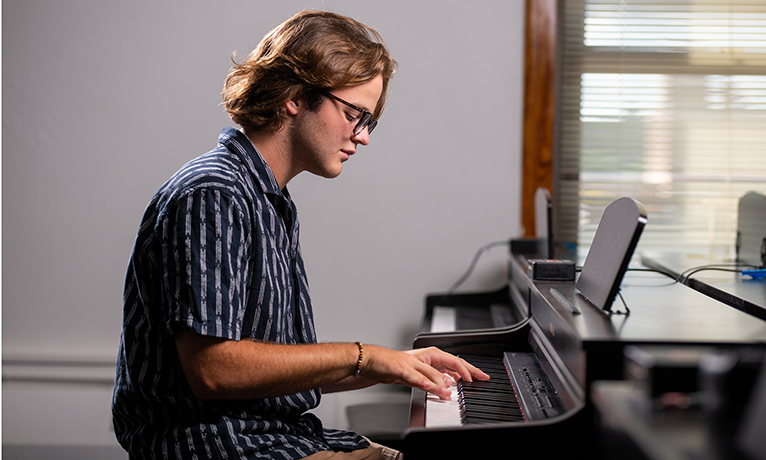 Brown used a piano when composing the jingle.

BW sophomore Joe Brown, a music education major, is the winner of BW's jingle contest, which tapped into the campus-wide student body of songwriters, composers and creative musicians to submit an original demo recording or score. Entry submissions had to use the words "BW will take you places." or "Take you places." Brown was named the winner in April.

As part of his prize, he worked with recording engineer David Kennedy of Kaboom Collective, which is in-residence at BW's Conservatory of Music, to create a professional recording that will be used in marketing materials on the BW and Conservatory YouTube channels.

Opportunity to stretch his creative chops

Brown composed and performed all instrumental and vocal parts for the jingle. The Hudson, Ohio, native said that while he can't take credit for the lyrics, he does "love the emphasis of BW being a stepping stone to higher accomplishments and goals." He went on to say that when composing the music, he tapped into the original work of Collier and Wurtz.

"I'm a big fan, so I thought it would be really cool to approach the jingle in their style. A lot of the time, when I try to work using another artist's toolbox, I find myself discovering new parts of my own sound," he explained. "For example, I really wanted to capture the layered vocal effect that Jacob Collier is known for using. After working on the jingle, that texture has made its way into my own music.

"I was given the guidelines of the lyrics and having the piece be no longer than six seconds, so I knew that I had to find a way to push my creativity through the box those guidelines made for me. I found the melody while I was practicing piano one day. As soon as I discovered that part, my brain started developing the rest almost subconsciously. The funny part is that it only took me about a half an hour to record all of the parts because I knew exactly what I wanted it to sound like," he added.

"Opportunities like the jingle contest give me a chance to stretch my creativity and experience other realms of the industry that I don't get to see every day in the Conservatory, such as working with David Kennedy. As a bedroom producer, it's absolutely fascinating to study the workflow of somebody as pro as David. I learned so much from that experience and built a very valuable connection," noted Brown.

According to Dr. Beth Hiser, who was the coordinator of the contest, 15 submissions were received. Entries were judged by a panel of five people representing faculty, alumni, students, administrative staff and the community. The criteria were catchiness, creativity, style, length and lyrics.

The interim associate dean of the Conservatory went on to say that the initiative was a success because it exemplified a student-centered project and empowered them to become creators. Hiser also noted that students who submitted jingles were able to deepen their understanding of creating music and showcase their combined skills of music composition, instrumentation and arrangement, recording and copywriting.

"Jingles are earworms. They are short, little sound bites that stick with people. Hopefully, our new signature sound will make people think of Baldwin Wallace," said Hiser. "Opportunities like this enable students to make professional connections and gain the skills and experiences needed for success."