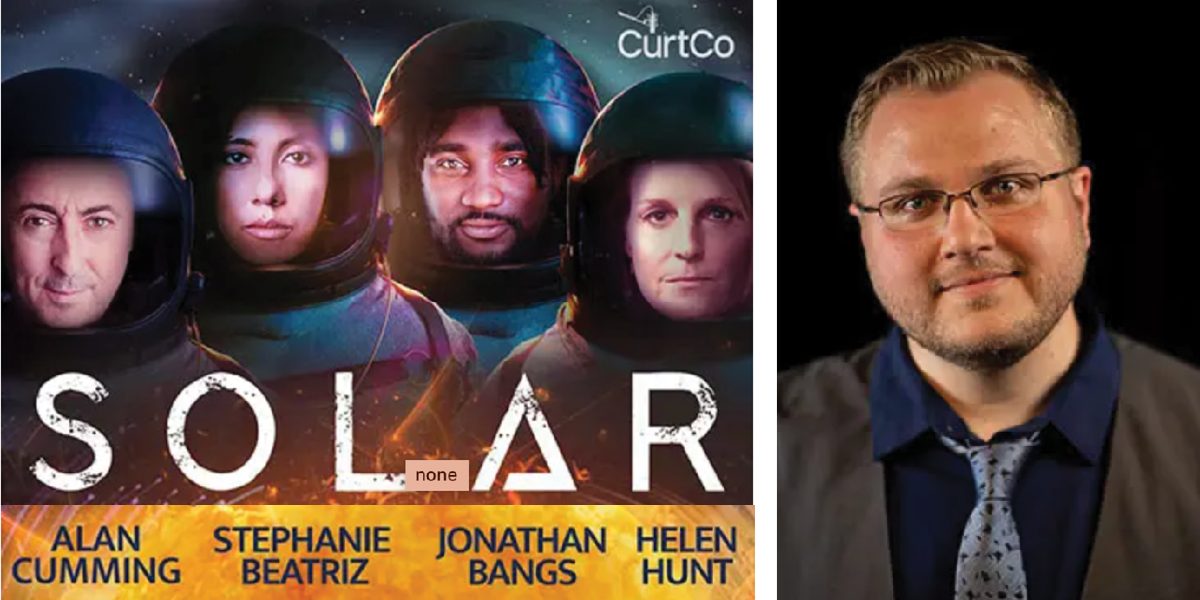 Such is the case for "Solar," a new sci-fi podcast series  created and co-directed by multitalented Baldwin Wallace University graduate Chris Porter '06.

"'Solar' features a cast of some incredibly talented actors," Porter says. "I am still in disbelief at the people who came on board."

"Solar," which launches with the first two episodes on Tuesday, March 29, and weekly releases to follow, is described as "a journey to the heart of the solar system and an exploration of the vastness of the human spirit."

Forged in the pandemic

Porter's story finds a space crew disconnected from Earth and fighting for survival following a disaster on board a manned solar research probe sent to explore temporal distortion around the sun.

Like so many entertainment projects coming out in the past year or so, "Solar" came to life in fits and starts due to the pandemic.

"Turns out — writing a show about extreme isolation and desperation while Earth is falling apart from a solar flare hit a little too close to home while I was living in extreme isolation and desperation while Earth was closing down because of a pandemic," Porter recalls. "But the pandemic did give me perspective. I could write more honestly about the themes of the show. And I think 'Solar' is better because of it."

Porter says the pandemic delays and restrictions meant the recording process took months. But once sound designer C.J. Drumeller got to work creating "a world out of sounds that completely lived up to my imagination," and Porter himself went to work on the score, the project came together.

He advises listeners to wear headphones for an amazing immersive experience for the Dolby Atmos-mastered final product.

For Porter, the road to "Solar" began with the discovery and development of his musical and storytelling voices at Baldwin Wallace.

He credits BW Conservatory of Music professors like Dr. Loris Chobanian with encouraging him to let go with his music and stop "holding back." At the same time, Porter didn't want to give up his second passion for creative writing and successfully married the two as an undergraduate.

"[BW Composer-in-Residence] Dr. Clint Needham even did me the honor I can never repay of conducting a one-act chamber opera I wrote (libretto and music) at BW for the Composition Symposium," he shares with gratitude. "All of that helped me grow as a writer and composer and set my mind working as to how they both overlapped."

Porter continued to build his skills following graduation through the Los Angeles-based Act One program for screenwriting and went on to earn an MFA from the Disney-founded California Institute of the Arts in 2009.

"Depending on the project, I serve as a lead writer, music director, composer and/or supporting writer," Porter says. "Speakeasy productions have been among the most rewarding creative endeavors of my life!"

In fact, Speakeasy would also lead him to this latest project and his "Solar" co-director/producer, Jenny Curtis. She was an actor in one of Porter's Speakeasy plays, and she connected him to her father's podcasting company, CurtCo Media.

The rest is "Solar" history.

"The fact is — I wouldn't have done any of this if I didn't keep pursuing all the things I loved (writing and music)," Porter muses.

"I got advice early on from some reliable sources saying I should pick music or writing because it would be impossible to do both. It wasn't bad advice ... but it was wrong for me. I can't imagine a world where I had to cut off music or writing. And I'm very lucky to have found an outlet that lets me do both."