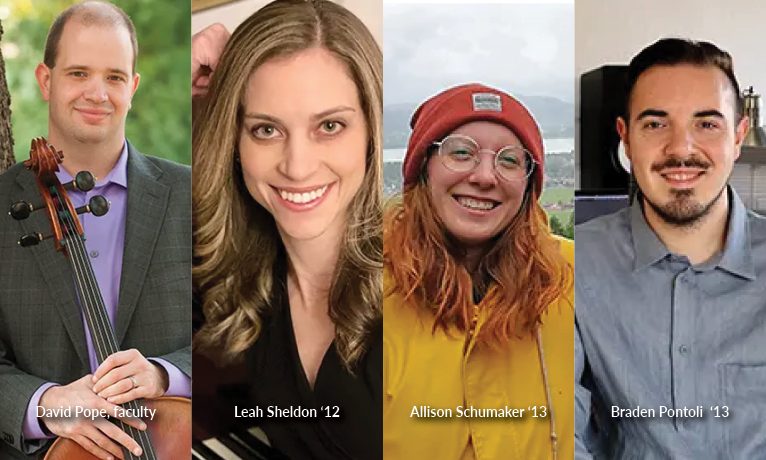 From Pittsburgh to LA to Germany, these music educators reimagined their careers — enabling them to pursue a newfound passion that integrates their love of music.

And while they represent just three of the innumerable and successful Baldwin Wallace music education graduates, their career paths showcase the value, flexibility and scope of the major. We call it allegro because, like the Italian musical term that means cheerful and lively, these three alumni are finding joy and purpose in their pursuits.

"With a near-perfect job placement rate in the field, our graduates are poised for career success. While most individuals will have rewarding careers as music educators, some pivot to pursue a personal or professional aspiration outside of the traditional classroom. But even then, surrounding themselves with music and sharing it with others remains central to their focus," noted Dr. David Pope, associate professor of music education at the Baldwin Wallace University Conservatory of Music.

"Music educators have a high level of professional discipline and skills that are desirable in many career fields. They are excellent communicators, multitaskers and problem-solvers. They know that colleagues must motivate each other to succeed and that a single motivation strategy will not apply to everyone. As a result, they become effective team players and connect with people as individuals. These traits enable them to succeed across many career opportunities," he emphasized.

"When I graduated from BW in 2012, I accepted a position for K-4 elementary music in Ohio and started a piano studio out of my home," said Leah Sheldon, who recently re-established residency in her hometown of Pittsburgh.

"After six years, I became the middle school band director and assisted with the high school band in the same district. I started working toward a Master of Education in School Leadership but realized very early that my heart wasn't in it. Being an administrator would pull me away from my passion of teaching music," admitted Sheldon.

"Fast forward a few years, and I happened upon a posting from uTheory seeking an educator for head of teacher engagement. I was intrigued and challenged by the idea of supporting other educators in teaching music theory in their classrooms," she went on to say.

"I truly enjoy and connect with my work with uTheory. In my school classrooms, I was passionate about incorporating music theory into the curriculum. Now, I can share this interest with teachers and students worldwide," she added.

Ask Allison Schumaker '13 about her career, and she'll smile at how nicely her professional life melded with her personal goals.

"When I came to BW from Marietta, Ohio, I wanted to be a choir director," she began. "After taking a general music methods course my sophomore year, I changed focus. My first job after graduating was as the early childhood music teacher at Hathaway Brown School.

"Although I loved living in Cleveland, I knew I wouldn't stay forever. I had done a semester abroad in Vienna, Austria, during my junior year at BW. My goal ever since was to eventually live abroad," recalled Schumaker.  "In 2016, I started looking for jobs around the world. I eventually found one in Germany and later transitioned to my current position as the general music teacher at the Swiss International School in Friedrichshafen [Germany].

"Looking back, BW's unique blend of performance and pedagogical practice opportunities prepared me for success. Through internships and other experiences, I could explore my interests. This gave me the confidence and skills to follow my dream," she believes.

Braden Pontoli's website says it all. The multi-talented musician, composer, conductor and educator is a self-professed boundary-pusher who likes to "infuse his music into new media and concepts."

Currently working as an admissions counselor with Los Angeles College of Music, the entrepreneur is propelling his career forward through his company Braden Pontoli Music. The film composer and sound designer is building name recognition with independent film directors in Los Angeles. Among successes is his work on  "Super Bois" (Mancinetti Picture), which has been accepted into more than 30 film festivals globally and earned Pontoli his first IMDb (Internet Movie Database) credit.

His hometown Pittsburgh to LA trek wasn't linear. After graduating from BW in 2013, he conducted and managed a middle school choral program with Avon Lake City Schools in Ohio and directed a church choir and music program.

"What I was missing was performing and creating my own music," he admits. "I wanted to study different factions of music other than the traditional routes. I started a new chapter in my musical journey at California Institute of the Arts for a Master of Fine Arts in music performance and composition at the Herb Alpert School of Music."

His advice to aspiring music education majors considering BW is simple: "If you are looking for a conservatory that is forward-thinking, nurturing, yet rigorous, BW is the place to be."